System and product developmental research, design, fabrication, integration, and consultation for the individual up to medium sized business. “We Make Your Ideas Real.”

The FEF3 team is all about designing and making (or overseeing the making of) widgets and systems of widgets that excite others and do cool/amazing things! We find this exciting! Every member of the team wants to work with, collaborate with, and succeed with the community of employees, clients, customers, and suppliers that form around the work we do. This sounds amazing and is highly rewarding; to bring to fruition the visions and dreams of all those involved, for the benefit of all.

Things of great quality and/or elegance inspire every member of the FEF3 team – from theatrical performances, to a top flight engineered system or device, to art, to great accomplishments in any field by skilled individuals and teams. 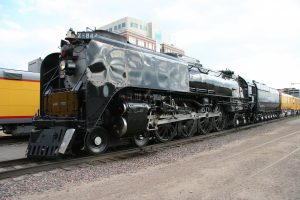 FEF3 is an acronym for Union Pacific Railroad’s (UP’s) fleet of ‘Northern’ class steam locomotives. FEF3, or “Four-Eight-Four, Series 3” describes the 4-8-4 wheel arrangement (4 wheels on the lead truck, 8 drivers, and 4 wheels on the trailing truck) of these locomotives. “Series 3” indicates the third generation of the UP 800 series passenger steam locomotive. The UP 800 series pulled crack passenger trains starting in the late 1930’s. They were fast and powerful, cruising at 100+ MPH (161+ KPH) while pulling a fully loaded passenger train. Displaced by streamlined diesel locomotives in the mid 50’s, they were relegated to freight service where they lived out their lives in fast freight and helper service on UP’s most challenging routes. When they were finally retired in the late 50’s most fell to the cutting torch, as did the bulk of UP’s steam fleet. Fortunately some were saved and made their way into museums or ended up on static display. One still operates today, UP’s 844 (pictured here). Built in 1944, it was never taken off of UP’s locomotive roster. The 844, and her steam companion, the “Challenger” 3985, the world’s largest operating steam locomotive, can be found at UP’s Cheyenne Wyoming round house. Maintaining and operating these locomotives, as well as UP’s other historical equipment, is a credit to Union Pacific, its management, and to UP’s Steam Team.

I learned that courage was not the absence of fear, but the triumph over it. The brave man is not he who does not feel afraid, but he who conquers that fear.

Are you looking for a forward thinking development group to help grow your idea and bring tomorrow’s technologies into your project? Get in touch with us today!